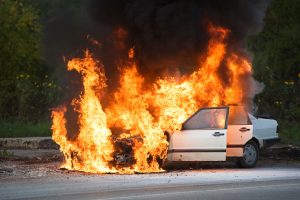 Car fires are rarely anticipated by Ohio drivers, so they may come as a shock. Last month, it happened to a Columbus woman who was driving a 2015 Kia Soul, according to ABC6.

Luckily, she was able to escape minutes before the vehicle became fully engulfed in flames.

“We were sitting there watching it burn, you could hear the airbags pop,” the woman told ABC6.

Only months prior to the incident, Kia recalled nearly 400,000 hatchbacks due to fire risks associated with the catalytic converter. However, the woman’s engine model was not listed in the recall.

How Often Do Car Fires Happen?

According to Consumer Reports, car fires happen more often than we think, and mechanical defects are often to blame.

This has prompted the National Highway Traffic Safety Administration (NHTSA) to investigate about 3 million Hyundai and Kia models regarding the risk of fires not related to crashes. The automakers have documented more than 3,000 incidents and are in full compliance with federal regulators.

Tesla’s Vehicle Safety Report was referenced by a company spokeswoman after several videos and pictures of their electric cars went viral on the internet,  In the report, the automaker said, “From 2012–2018, there has been approximately one Tesla vehicle fire for every 170 million miles traveled. By comparison, data from the National Fire Protection Association (NFPA) and U.S. Department of Transportation shows that in the United States there is a vehicle fire for every 19 million miles traveled.”

The Federal Emergency Management Agency (FEMA) estimates that there were 171,500 highway vehicle fires each year from 2014-2016 throughout the US. More than 142,000 of those fires involved passenger vehicles, according to FEMA — an average of just shy of 400 fires each day. Annually, this resulted in:

The National Fire Incident Reporting System (NFIRS) reports that only five percent of vehicle fires were caused by crashes. However, crashes were the cause of 60 percent of fatal highway vehicle fires.

From 2014-2016, mechanical failures were found to be factors in 45 percent of car fires — with electrical defects accounting for 21 percent and misuse of flammable materials accounting for 13 percent.

Safety Measures You Can Take To Avoid Injury Or Death

Fires can happen quickly and without warning. That’s why it’s best to be prepared to take action in order to avoid a serious crash, injury, or death. Consumer Reports suggests following these steps:

The risk of car fires can be mitigated by doing the following:

The NFPA says to watch out for these warning signs:

If you or a loved one was injured in a car fire or any related car accident, the automaker or a parts manufacturer may have failed to place a safe product on the market. That’s why it’s crucial to discuss this matter with an experienced Ohio car accident attorney who can launch a thorough investigation and advocate on your behalf.

To set up a free case evaluation and explore your legal options, contact the Michael D. Christensen Law Offices today.