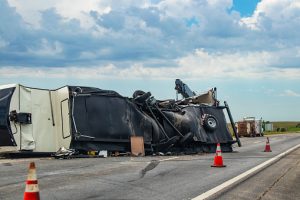 Unfortunately, many hazardous trucks travel on highways and can become involved in serious or even fatal accidents. Collisions on highways are especially likely to cause injury or fatalities because trucks travel at high speeds hauling great weight.

If the trucks are carrying hazardous material, including flammable material, the close proximity of  highways exacerbates the danger, as does the difficulty of getting fire departments or cleanup crews to the crash scene.

The recent accident on I-80 occurred just after mile marker 229 at approximately 6:00 AM. The trucker was traveling southbound when he drove his truck off the right side of the road. The truck rolled over and became stuck in a ditch.

The driver was able to get out of the vehicle. Two other drivers stopped to help the driver get out of the ditch. Once the driver had been assisted out, he warned other motorists his truck was full of more than 8,000 gallons of gas. The truck driver and two other men ran as quickly as possible away from the semi, which burst into flames.

Ohio State Highway Patrol Troopers, the Ohio Department of Transportation, and local police shut down I-80 and nearby highways because they needed to be able to get fire trucks to the scene and because of the dangers presented to other vehicles. The fire was described as being in a very difficult location for fire trucks to get to, especially as there was road construction on the highway.

Firefighters from more than a dozen departments came with chemical foam and water to douse the flames, which restarted even after they thought the fire was out. Finally, they were able to successfully put out the flames. However, several cars were burned and I-80 and the nearby highways did not reopen until 3:30 PM.

The accident clearly illustrates the tremendous dangers of truck crashes on highways. Fortunately, the motorists in the other cars that caught fire were not in them at the time and the trucker was able to get out safely.

Sometimes, because cars and trucks are so close together, highway truck accidents that cause fires do end up with motorists being trapped in burning cars.  Cars may have nowhere to go to avoid the fire hazard on tightly packed highways, exacerbating the risk. Since fire fighters may not be able to get to the area quickly because of congested highways, as was the case here, many motorists could be at risk for a long time until the fire is dealt with and the danger eliminated.