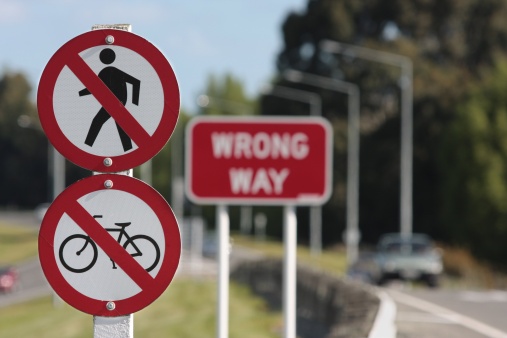 On average, 500 people die every year due to wrong-way driving crashes. It’s been a consistent problem across the country’s highways, but now the issue is only getting worse.

So, what’s driving the increase in crash fatalities?

FACTORS THAT CONTRIBUTE TO WRONG-WAY CRASHES

Researchers found that drivers who were impaired by alcohol were the biggest contributors to fatal wrong-way crashes. Other factors include age and driving without a passenger.

“Wrong-way crashes on divided highways are often fatal as they are typically head-on collisions,” Executive Director of AAA Foundation for Traffic Safety Dr. David Yang said. “And unfortunately, as the data shows, fatalities from these crashes are on the rise.”

AAA has partnered with the National Transportation Safety Board (NTSB) and other traffic safety organizations to educate drivers about the dangers of wrong-way driving. Both organizations are urging state transportation agencies to create robust driver-based initiatives to address the factors contributing to the rise in fatalities.

These include alcohol ignition interlocks (which prevent drivers from starting their vehicle without providing a breath sample), driver refresher courses for older adults, increased sobriety checkpoints, and the addition of more visible signs and signals.

ALCOHOL IMPAIRMENT IS A BIG PROBLEM

Drivers impaired by alcohol caused the greatest number of wrong-way crashes. In 6 out of 10 crashes, the driver was impaired by alcohol. Studies also show that individuals with blood alcohol concentrations over the legal limit of 0.08% were significantly more likely to be wrong-way drivers compared to non-impaired drivers in the same types of crashes.

The NTSB also listed impairment from alcohol and drugs on its “most wanted list” of transportation safety improvements.

“Alcohol impairment is, by far, the single most significant factor in the majority of wrong-way driving crashes, which unfortunately has not changed since the NTSB issued its Wrong-Way Driving special investigation report in 2012,” said NTSB Director of the Office of Highway Safety Dr. Rob Molloy. “The important work done by AAA shows that we need to redouble our efforts to address this safety hazard. We know that interventions like ignition interlock devices for all offenders and high-visibility enforcement operations will reduce these types of devastating crashes.”

AAA and NTSB urge drivers to use common sense before getting behind the wheel. To help prevent being involved in a wrong-way car accident, you can follow these tips:

If you were injured or someone you love died in a wrong-way crash caused by another driver, hiring a car accident lawyer is one of the best ways to seek justice and maximize the value of your claim. Remember, insurance companies aren’t your friend. Insurance adjusters will often try to pressure you into accepting a meager settlement offer because all they’re worried about is protecting their company’s bottom line.

At Michael D. Christensen Law Offices LLC, we don’t put up with the games insurance companies play. Attorney Mike Christensen and his dedicated legal team proudly fight for accident victims who were injured through no fault of their own. Let us deal with the insurance company and aggressively advocate for your best interests. If we can’t negotiate an appropriate settlement for your damages, we aren’t afraid to take things to court to fight for the compensation you deserve.

Contact us today for a free consultation. We’re located in Columbus, Ohio and we serve clients statewide.