Tired drivers are causing an increasing number of serious and fatal auto accidents, according to a recent study by the AAA Foundation for Traffic Safety.

With spring break upon us and the summer travel season just around the corner, it’s important to note than young drivers, ages 16 to 24, accounted for more than half of all drowsy driving accidents examined in the study. Elderly drivers were the next riskiest age group, accounting for more than 12 percent of such collisions.

Most strikingly, however, the study found that drowsy driving may be involved in about 10 percent of all motor-vehicle collisions. This is much greater than the 1-2 percent of accidents typically attributed to exhausted motorists.

Injury lawyers in Columbus are called upon to handle many types of accident claims. While drunk driving or distracted driving may be quantifiable (via blood-alcohol testing or cell phone records), traffic accidents caused by tired motorists can be harder to identify.

Allegations of tired driving can have a significant impact on personal injury litigation. Since 1980, Ohio’s liability law has followed the model of comparative negligence (ORC 2315.33). What this means is that motorists found more than half at fault for an accident may not recover damages.

However even in cases where negligence is alleged, recovery may still be possible. Under Ohio’s old comparative negligence law, fault of any kind could bar a plaintiff from making a recovery.

Adequate sleep is the best preventive measure. In 2016, the Columbus Dispatch reported missing just a few hours of sleep can more than double your risks of a crash. Those who sleep fewer than four hours a night were at 11.5 times higher risk of a drowsy driving crash.

The Ohio State Patrol reported 2,719 traffic crashes involving a fatigued driver that year. According to this newest study, in reality more than 10,000 crashes may have involved sleepy motorists on Ohio roads.

Aside from young drivers, those most at risk of drowsy driving include those who drive for work, particularly long-haul truck drivers. State and federal regulations, including Hours-of-Service regulations through the Federal Motor Carrier Safety Administration, attempt to limit driving hours to reduce the risks to other motorists on the road.

The government and trucking companies are also enacting a number of sleep apnea rules for truckers. In April, the U.S. Supreme Court declined to hear a case brought by a trucker that claimed such testing violated his rights under the Americans with Disabilities Act.

Odd schedules, poor dietary considerations and other job conditions make truckers particularly susceptible. Obstructive sleep apnea, or OSA, is a disorder in which a person’s breathing stops and starts repeatedly during sleep. Daytime fatigue is a common consequence of the condition.

In the event of an accident caused by a drowsy driver, you need the legal help of an experienced attorney. Contact Michael D. Christensen Law Offices LLC today and find out how we can help. 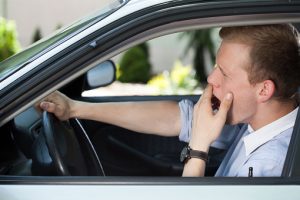