Everyone is at Risk of Intersection Accidents on Icy Roads 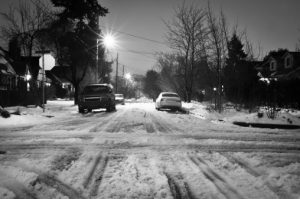 Late in December, an ice storm hit Ohio and contributed to a fatal car accident. A 20-year-old Columbus woman was traveling on 1-270 when her car careened off the highway and got stuck. She left her vehicle and was standing on the side of the road when another car also began to slide and hit her. She was taken to OhioHealth Grant Medical Center, but died of her injuries.  Freezing rain and slick highways all resulted in other accidents after the ice storm as well, with Columbus Dispatch reporting Ohio Highway Patrol officials responded to multiple collisions. The roads were described by the Dispatch as being “like skating rinks.”

Unfortunately, ice storms are a fact of life during Ohio winters. Motorists need to be aware of how these storms can cause collisions, especially around intersections. While drivers in Ohio may feel as if they’re used to winter weather and have things under control, no one is immune from potential involvement in auto accidents when there is ice on the roads.

A video on NPR that went viral shows exactly how serious the risk of car accidents is at icy intersections. The video also illustrated just how true the warning is that anyone could get into an accident.

The video starts with a crash in which a bus loses control and slides forwards into other cars. Multiple vehicles start to slide into each other as the vehicles are all at an intersection in close quarters. A taxi driver then comes along and sees the cars which have collided in front but keeps on driving. The taxi quickly loses control, but the driver is able to swerve to avoid joining the pileup.

Next, a police officer comes along in his car, presumably to address the crashes which have already happened in the area. The problem is, the officer isn’t able to safely drive through a downhill icy patch either. The police car spins out of control and joins the pileup.

It was not just the police officer who couldn’t avoid the crash either. A snow plow next came along, likely planning to get the ice and snow off the roads in the dangerous area. The problem is, even the plow was no match for the ice. The plow actually begin to spin out of control as well, hitting the police car before being forced to a stop.

Fortunately, no one was hurt in the incident and the video is now serving as a warning to motorists not to underestimate the risk of snow and ice. Even trained police officers and even snow plow drivers who are in vehicles well-equipped to handle storm conditions could lose control and get into accidents at icy intersections! Motorists should be cautious, drive slowly, not underestimate the danger, and try to avoid traveling towards an intersection where a pileup has already formed.