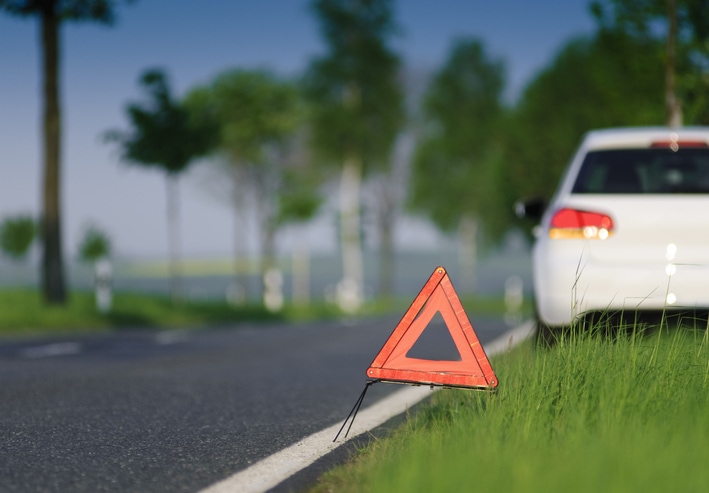 Stopped or disabled vehicles cause hundreds of fatal car accidents each year nationwide, according to a recent study conducted by the Insurance Institute for Highway Safety (IIHS) and Highway Loss Data Institute (HLDI).

Between 2016-2018, an average of 566 people were killed and 14,371 were injured each year nationwide in accidents involving vehicles crashing into disabled vehicles or cars parked on the side of the road. This included ambulances, road maintenance vehicles, and parked police cars. That’s according to Impact Research, a data analysis company that conducted the study for IIHS.

In addition, an estimated 300 pedestrians were killed on average each year. Hundreds more were injured while working on, leaving, or returning to a stopped vehicle, the study found. The number of pedestrian fatalities involving stopped vehicles has increased by more than 25 percent since 2014, according to the IIHS. In addition, more than 50 percent of stopped-vehicle fatalities and 20 percent of serious injuries involved a car hitting a pedestrian, the study found.

All of these injuries and fatalities add up to billions of dollars. Specifically, the financial impact of stopped vehicle accidents costs society more than $8.8 billion each year in medical expenses, vehicle repairs, lost wages, and other accident-related expenses, according to the IIHS study.

Why Do These Accidents Happen?

Poor visibility was a key factor in many accidents involving stationary or parked vehicles. That’s “because the stationary vehicle wasn’t conspicuous enough,” the study’s authors determined based on an in-depth analysis of these types of accidents.

Such accidents even occurred in cases when many parked or disabled vehicles had their hazard lights on. Other previous studies investigating stopped vehicle accidents indicated that speeding and distracted driving were also often a cause of such collisions.

“This study identifies a part of the road safety equation that doesn’t get much attention, despite the size of the problem,” David Zuby, executive vice president and chief research officer of IIHS, said in a statement.

What Steps Can Be Taken To Prevent Fatal Car Accidents?

IIHS officials and researchers recommended several suggestions for reducing the number of stopped vehicle accidents, including:

“These crashes illustrate the potential value of stopped-vehicle-ahead warnings, which are already provided by some navigation apps and could be integrated to work with advanced driver assistance features and more advanced driving automation,” Zuby said.

How Can A Car Accident Lawyer Help?

You might think you don’t need an attorney if another driver clearly caused a stopped-vehicle accident involving you or a loved one. Unfortunately, many accident claims end up being very complex legal cases. The at-fault driver who caused the crash might deny doing anything wrong. Their insurance company might refuse to cooperate. In addition, they often hire attorneys and sometimes even accident investigators. Their job is often simply to search for evidence they can use to reduce or deny your accident claim.

They don’t intimidate us. Attorney Christensen and his talented legal team at Michael D. Christensen Law Offices LLC in Columbus know how to handle complicated cases. We know exactly what evidence to look for in support of your claim. This can include:

We’re also familiar with the state and federal laws that often apply to such cases. That’s why we’re the law firm many injury victims and their families turn to after a stopped vehicle accident in Ohio.

Learn more about how we can help you after your car accident. Contact us at 866-408-8191 and schedule your free case evaluation today. Our office is conveniently located on West Broad Street in downtown Columbus.