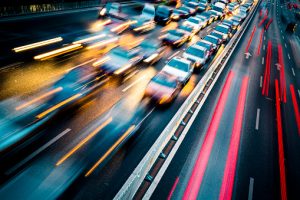 It’s not rocket science; speed kills. Many drivers exceed the speed limit without being aware of it. Others are simply in too much of a hurry to care about the consequences and cause car accidents. At best, you may have seen them pulled over and cited by police. At worst, you may have seen or experienced a devastating crash.

According to the Insurance Institute for Highway Safety (IIHS), speeding was a factor in more than 9,700 (26%) traffic fatalities across the United States – most of which occurred at speeds greater than 55 mph.

While speed-related crashes can happen on any roadway, congested metropolitan interstates are susceptible to serious accidents and pileups.

In order to enhance driver safety, the Ohio Department of Transportation (ODOT) is examining some portions of Ohio’s major roadways. Consequently, they’ll use crash data, weather patterns, and traffic congestion to determine if variable speed limits across the state could prevent crashes from occurring.

Currently, state law limits variable speed limits to the stretch of Interstate 90 that runs east of Cleveland to Pennsylvania, as well as I-670 in Columbus, and I-275 in greater Cincinnati. In order to extend variable speed limits throughout the state, ODOT has proposed House Bill 62, which requires approval from the Ohio General Assembly.

“Variable speed limits don’t make sense in every location,” said ODOT Director Jack Marchbank. “But they can have a huge impact on travel safety in some areas. We want to ensure we’re picking strategic locations where weather or traffic congestion creates a frequent hazard to motorists. We only want to use it where we believe it will make a difference in safety.”

How Effective Are Variable Speeds?

Variable speed limits were initially piloted on a stretch of I-90 in Lake County that is often compromised by lake effect snow and sometimes experiences whiteout conditions. ODOT reports that since implementing variable speed limits on that portion of I-90, only one serious injury has occurred. No accident-related deaths have been reported.

ODOT’s next step is to launch the state’s first pilot project on I-670 in Columbus called the I-670 SmartLane project. The project will determine an appropriate rush hour variable speed limit on a small stretch of the highway that experiences traffic congestion.

“The goal of the I-670 SmartLane project is to lower the eastbound speed limit during the evening rush hour in order to help reduce the stop/start cycle that leads to more time lost sitting in traffic and more crashes. The project also includes converting the inside eastbound shoulder to a travel lane for several hours in the evening to help get more vehicles safely through that highly-congested stretch.”

If you or a loved one was injured in a crash caused by a speeding driver, car accident attorney Mike Christensen can help you in the pursuit of justice. Contact Michael D. Christensen Law Offices LLC today to learn more.