If You Wave A Car Into Traffic And It Gets Hit, Who Is At Fault?

Home » Blog » If You Wave A Car Into Traffic And It Gets Hit, Who Is At Fault? 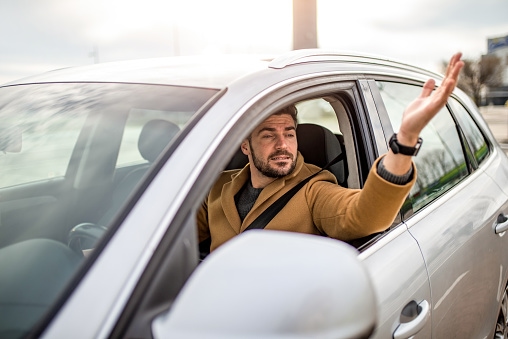 Who Is At Fault If A Waived Car Gets Hit?

We’ve all been there. You’re in your car, waiting to make a turn. A polite driver in an opposite lane slows to a stop and waves at you to go ahead in front of them.

It’s a thoughtful gesture, the kind of thing that contributes to the “Midwest nice” phenomenon.

But it’s not safe and could get you — as either the waver or the waved-to — in trouble if it leads to a bad car accident.

Various states have different rules about who is responsible for accidents initiated by a wave. In Ohio, the situation is confusing with conflicting court opinions on liability.

When a traffic maneuver or turn is attempted on a wave, usually it’s only the drivers directly involved that are aware the normal rules of the road are about to be temporarily suspended. Other drivers on the road may try to pass. On streets with two lanes of traffic in each direction, someone may wave you into one lane but not see cars speeding by in the other.

Who’s At Fault In A Car Accident Caused By A Wave?

Most states don’t have hard-and-fast rules about who is at fault in an accident influenced by a polite wave.

Three states — New Jersey, Pennsylvania, and Virginia — allow you to sue someone if they waved you into an intersection and it resulted in a crash. In Georgia it’s different. There the law says that, in most cases, you cannot sue someone over a wave-in.

In Ohio, we have conflicting opinions. The state Supreme Court has ruled that you “cannot rely on a signal given by a stopped vehicle.” Doing so, the court said, might be “negligent.” Since then at least one district court has ruled that the question of liability changes case-to-case and should be decided by a jury.

Some traffic experts say that the best way to be courteous on the road is to never wave or accept a wave-in. You’re better off observing standard right-of-way rules. This keeps traffic moving and reduces the risk of accidents.

Who Has The Right Of Way?

To follow the right-of-way rules, you need to know them. Here’s what “right of way” means in Ohio

Take Back Control After A Car Accident

Midwesterners are known for their niceness, but there is nothing nice about having to deal with the aftermath of a car accident involving a waving driver.

Even if you think your crash seems straightforward, the insurance company for the driver who caused your accident will probably try to avoid responsibility. Insurance company agents often work hard to reject or minimize claims, and in a lot of cases, they blame victims for accidents. Keep in mind insurance companies are financially motivated to pay you as little money as possible, and if you’re not careful, that’s exactly what might happen.

That’s why you need an experienced car accident lawyer who knows how to fight for car injury victims in Ohio.

Get Legal Help With Your Car Accident Case

At Michael D. Christensen Law Offices LLC, our dedicated legal professionals have a proven record of success and take pride in helping our clients recover the compensation they’re entitled to.

We also offer legal representation on a contingency fee basis, which means there is no upfront money, hourly rate, or retainer for you to pay. Our fee is a percentage of your final settlement or judgment, and if we don’t win, you don’t pay. It’s that simple.

Find out how our law firm can help you and contact us today for a free consultation.