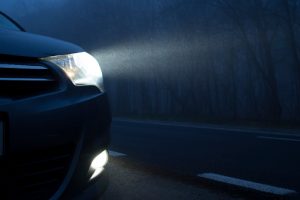 AAA is urging the federal government to permit installation of high beam headlight technology that increases roadway lighting, without the glare that disturbs oncoming drivers.

“Driving at night doesn’t have to be such a risky undertaking for Americans,” said John Nielsen, AAA managing director of automotive engineering and repair.

A story on the AAA NewsRoom website said the technology known as adaptive driving beam (ADB) headlights is the first real solution to providing more light for drivers at night. The technology is in use in Canada and Europe.

The ADB headlights—also called smart headlights—shine as brightly as traditional lights with the high beams on. They feature new technology that keeps high beams on all the time while also preventing glare from shining into the eyes of drivers of oncoming cars, according to Consumer Reports.

ADB headlights can minimize the perception of glare by automating and quickly performing the reduction from high beam pattern to lower intensity for the portion of the headlight beam that intersects other drivers, Ingrassia said.

Most American drivers, 64 percent, don’t regularly use high beams. This means that when driving at moderate speeds like 40 mph with low beams on, motorists likely will not have enough time to react appropriately to something or someone in the roadway.

High beams improve illumination by 28 percent and with ADB, again, high beams are always on. The additional lighting provided by ADB headlights would translate into additional safety on the road, Ingrassia told the National Highway Traffic Safety Administration.

In its analysis, AAA found that roadways with hills were the most common areas where oncoming drivers were subjected to potential glare by an ADB-capable vehicle. On roads in Europe, where ADB headlights are permitted, glare problems occurred less often than with U.S. headlights, however.

U.S. standards that govern headlights include a shortcoming in how the devices are assessed for compliance. Only the headlamp assembly is evaluated, in a laboratory, as a stand-alone part. Such an evaluation fails to incorporate on-road dynamics, like the performance of headlights in relation to other vehicles on roadways.

Here are nighttime driving tips from AAA, as the National Highway Traffic Safety Administration decides whether to permit ADB headlights:

Contact Mike Christensen Law Offices LLC for help with headlight-related vehicle crashes and for help with other car accidents. Schedule your free case evaluation with a personal injury lawyer today.