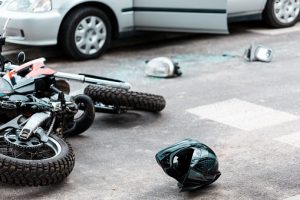 A motorcycle crash on a recent Sunday afternoon resulted in victims sustaining serious injuries. The accident happened on State Route 7 when a motorcycle was heading east and a white SUV turned onto the road. WDTN reported the motorcycle slid and crashed in order to avoid colliding with the SUV.

Motorcycle accidents frequently cause serious injuries, which can lead to costly medical care. It is very common for victims to find that not all of this care is covered by health insurance, even if the victims have coverage. When someone else was responsible for causing the accident, the victims can avoid financial loss by pursuing a claim for damages from those who caused the accident to occur.

A victim of a motorcycle accident may receive many different kinds of costly treatment depending upon the injuries the crash has caused. One of the biggest expenses, however, may come not from the medical treatment provided at the hospital but instead from the means by which the victims were transported to the hospital. In this recent Ohio accident, for example, the two victims were both transported via an air ambulance.

NPR reported on the expenses which are associated with the use of air ambulances, indicting injured people who end up being transported using this means can be left with “sky high” bills. Insurance may cover only a very small portion of the significant expense associated with an emergency air ambulance and, in a lot of cases, insurance doesn’t end up picking up any of the tab.

Victims typically do not get a choice in whether they are transported by air ambulance, as they are often unconscious or unable to communicate when their injuries are serious enough to require them to be airlifted.

Even if they did have a choice, if being airlifted to a hospital could save their life, they would almost certainly choose to take the air flight despite the cost. Still, the expense of this trip, coupled with other medical expenditures that may not be covered by health insurance, could mean many thousands of dollars in medical bills.

Families of victims, and those who are hurt in motorcycle accidents, should not have to struggle to repay the medical expenses for years if someone else was responsible for causing the collision. Victims should pursue a claim for compensation from those who were responsible for causing the motorcycle accident so they can get all of their medical expenses paid for and avoid the financial worries associated with mounting healthcare bills.