Is A Smartphone Manufacturer Responsible For Crash Prevention?

Home » Blog » Is A Smartphone Manufacturer Responsible For Crash Prevention? 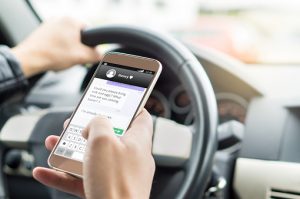 In 2003, a car accident victim sued Cingular after she was hurt in a collision caused by a driver using a Cingular phone. The crash victim tried to hold Cingular accountable for the collision, but the New York Times indicates the lawsuit was not a success. An appeal court affirmed the ruling that Cingular could not be held accountable for the auto accident for two reasons.

One of those reasons was that Cingular and the victim of the collision did not have a relationship with each other.  The second reason was that Cingular couldn’t be held liable because it could not have foreseen the accident. The lack of foreseeability meant the company was not to blame.

Today, it would be difficult to argue that cell phone companies couldn’t foresee the risk of a crash caused by distracted driving. Driver distraction has become a leading cause of motor vehicle collisions, with the Centers for Disease Control and Prevention reporting that eight people die and another 1,161 people are hurt each and every day in collisions caused by distraction.

Still, despite the known risk, cell phone companies have generally not taken steps to stop distracted drivers. Now, Washington Post reports that Apple is being sued for its failure to prevent a driver from using an iPhone while behind the wheel.

The lawsuit arises out of a tragic accident that happened shortly before Christmas in 2014. A family was traveling on an Interstate in their Camry when they had to hit the brakes because traffic had stopped up ahead. The driver of the SUV behind them was on FaceTime and he didn’t see their brake lights. His SUV slammed full force into their car, injuring all four family members. The father who had been driving and the five-year-old daughter in the back seat were both trapped inside of the car and had to be extracted.

The father survived, but the little girl didn’t. The family wants Apple to be held accountable for not disabling FaceTime. The driver is facing criminal charges for manslaughter, and police indicate the phone still had the FaceTime video chat app open when the phone was found after the collision.

Apple has indicated they believe the driver is the one responsible for making the choice to use the app while driving. Although they did file for a patent on lockout software that could lock apps when someone is driving, neither Apple nor other cell phone companies have an automatic lockout feature installed on phones yet. The phone does have the ability to detect when someone is in a vehicle, but couldn’t distinguish between someone who was driving versus a passenger or person on a train, so implementing a lockout might be very impractical.

It remains to be seen if Apple will actually be held accountable in this case. Although the risk of a crash is foreseeable, the absence of a relationship establishing Apple’s obligations to the victim may still prove to be an obstacle preventing the family from holding the tech company liable for losses.

If you or a loved one has been involved in a car accident due to distracted or negligent drivers, Columbus Ohio Lawyer Mike Christensen will help you get just compensation for the damages and any medical expenses caused by another party. Contact us and set a schedule for a free case evaluation.